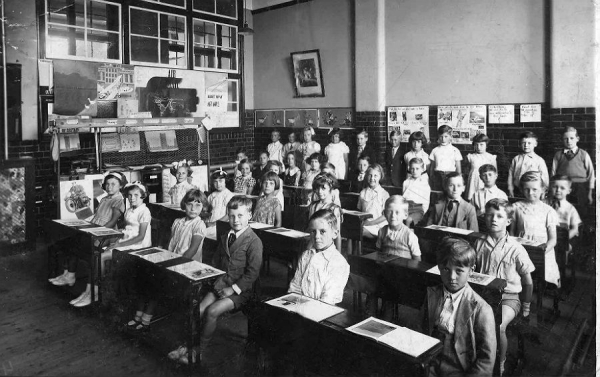 The belief that technology can automate education and replace teachers is pervasive. Framed in calls for greater efficiency, this belief is present in today’s educational innovations, reform endeavours, and technology products. We can do better than adopting this insipid perspective and aspire instead for a better future where innovations imagine creative new ways to organise education.

In the 1920s and 1930s, American psychologist Sidney Pressey worked to create a future in which machines would eliminate “the grossly inefficient and clumsy procedures of conventional education,” freeing teachers from routine tasks, to be “real teachers” instead of “clerical workers”

Pressey created the “Automatic Teacher” to realise this vision. This was a teaching machine that presented information, accepted a response and returned pre-recorded feedback. Since then, numerous educational technology initiatives have sought to automate the delivery of instruction and assessment.

For example, during World War II, filmstrips were used to train large numbers of civilians and military personnel in the United States. The radio, television, computer, and internet have been used in a similar fashion.

These historical examples illustrate the belief that education can be standardised, neatly packaged, and efficiently delivered to large numbers of people, and replace teachers in the process.

The same belief is embedded in today’s debates about education. In January 2014, writing for the Washington Post, futurist blogger Dominic Basulto predicted that an “artificially intelligent machine” could teach Massive Open Online Courses (MOOCs), “lecturing, grading and engaging with students … making the delightfully erudite college professor a quaint artefact of the non-digital past.”

Later, in an article published by the Association for Computing Machinery, academic Yoav Yair argued that: “with the menial job of checking and grading assignments taken over by computers, we (human teachers) will be left with the responsibility to intervene and mentor our students.”

Numerous politicians promote the idea of automating aspects of education and replacing instructors with machines. In July, Rand Paul, a Kentucky senator, said:

If you have one person in the country who is, like, the best at explaining calculus, that person may be should teach every calculus class in the country … You’d still have local teachers to reinforce and try to explain and help the kids, but you’d have some of these extraordinary teachers teaching millions of people.

A few days later, Newt Gingrich, a former US representative, wrote: “The cost of educating each student declines in blended-learning environments, in part because schools require fewer teachers to manage the classrooms.” Blended learning is when a student learns part online, part face-to-face with a teacher.

While these ideas appear mainly in the US, they seem to have a global appeal. In the UK for instance, the academy chain Ark Schools anticipates creating new roles for teachers using blended learning to achieve “staffing efficiencies” that reduce the number of current teachers but “increase the reach of great teachers.”

The search for efficiency

Educational technology products frequently highlight efficiency. One flashcard app claims that its “proprietary spaced-repetition algorithm delivers high-efficiency learning.” And the automation of teaching is perhaps most evident in the context of some MOOCs which not only use recorded lectures and automated assessment to scale, but appear to run “fully-automated” without a faculty members’ participation.

While technologies have evolved dramatically between 1926 and 2014, the parallels are striking. These examples are not intended to be exhaustive. Rather, they illustrate an ongoing fascination with efficiency. The focus is on saving time and money via software, videos, and algorithms that lecture, grade, and manage.

Research suggests that automation tools can be designed to facilitate learning activities and learners may have socially engrossing experiences with artificially intelligent instructors. But, do these innovations serve the learning needs of contemporary societies?

Other ways of learning

Such innovations draw from the expertise of multiple instructors and allow learners to create (and not just consume) knowledge, such as by writing textbooks. They promote experiential learning and encourage academics to share their scholarship, such as their teaching, frequently and openly.

Such innovations resist the reductionist agendas of the efficiency narrative and encourage content experts, learning designers, computer scientists, and education researchers to work together in the design of future learning environments.

In a recent research project I conducted with colleagues from Stanford University, we interviewed a number of individuals to learn about their MOOC learning experiences. One student reported experiencing demeaning and abusive comments on a discussion board that was never visited by the professor and/or their assistants.

The student said that it was “like that course didn’t have an instructor … there was someone who built the class and created the reading but that was it.”

We should be aspiring of a better future.

Tweet
More in this category: « Business drops the baton in higher ed innovation. Educational TV 2.0: Screen Time Can Be a Good Thing »
back to top