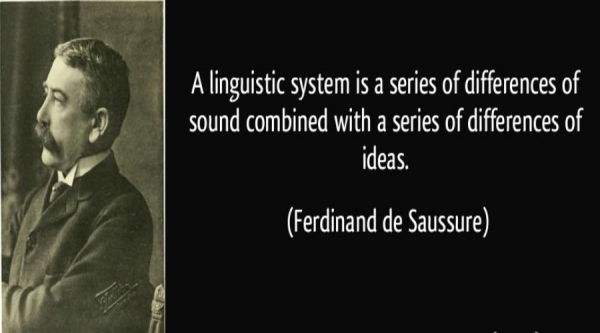 Ferdinand de Saussure (1857-1913), was a Swiss Linguist who laid the great foundation of the field of Linguistics in 20tth century.

The book Cours de Linguistiques Générale, written by his disciples published posthumously in 1916, is a compilation of his lectures given at University of Geneva around 1901 or 1906. It has become an essential text in the literary canon of linguistics as the book documents his research, ideas, and analysis of the nature of language that gives us a great insight into the basics of structural linguistics.

For anyone new to the linguistics, it becomes necessarily important to be thoroughly familiar with the major dichotomies or concepts that Saussure came up with in his Cours de Linguistiques Generale (1916). Through these principles or concepts, we can trace back the origins of the Structural Linguistics.

The language is constituted of two parts: langue and parole. And the linguistic communication is just not possible if these two work independently and individually. The Langue represents the system of language having signs, rules, and patterns devised by a particular social group for communication. The parole meaning the utterance of that Langue and thus, it varies from community to community and region to region. (However, this dichotomy is now overshadowed by Chomsky's distinction between competence and performance.)

For example, in English, an apple is called an apple whereas it is called яблоко (yabloko) in Russian. Hence, the langue in English has rules and patterns of letters which allows the parole to utter an apple as an apple. The same goes with the latter.

Rachael drinks juice a lot for keeping her body healthy.

On the contrary, a paradigmatic relation between the words will be when these two words can substitute each other in a sentence without affecting the meaning of the sentence. A paradigmatic

John likes to drink water a lot for keeping his body healthy.

If you look closely at the table, you can see that horizontally when words are sequenced in order; it creates a meaningful whole that something is being eaten by someone whereas you may see that vertically, the words can be replaced without changing this meaning. This opposition of paradigmatic and syntagmatic relationship is a dichotomy in linguistics.

For example, you study the Old English in England, you are using a synchronic approach where you are limiting your study to a particular period of time.

But if you are researching on the evolution of English language and its use from Middle English to Modern English, it would be called a diachronic study or historical linguistics.

Signs are the basic elements of the linguistic communication which Saussure called arbitrary. He believed that signs are understood best on the basis of what is signified (mental image) and what signifies (signifier). He argued that a word in any language is given the meaning through the functioning of signs which forms the relationship between signifier and signified. And this relationship he called purely arbitrary which has no logical meaning. Let us understand this through this example:

The word cat has no logic why it refers to a cat, and hence there are different names for the cat in various languages.

A small mammal with four legs: The Signified

However, if we can name a cat as Meow, it can be said to be logical because the cat actually makes this sound.

A small mammal with four legs which makes the sound meow: The Signified

Hence, Saussure concluded that the relationship between signifier and signified is arbitrary.

These were the central concepts of Saussure that made his successors study the use and function of language in a different perspective.

Tweet
More in this category: « Family Literacy Teaching reading – it’s simple but not simplistic »
back to top