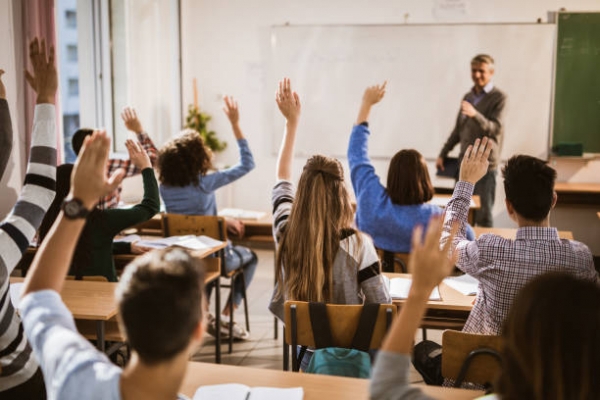 When the teachers and administrators at a middle school determined that A–F grades didn’t align with their goals, they began a years-long shift in how they assess student learning.

When New York City implemented standards-based grading in April 2020, it was an indicator of a sea change in the evaluation of student learning.

Indeed, a growing number of schools across the country are implementing standards-based learning (SBL) practices that align with the values and needs of a dynamic and changing world.

At Hall Middle School in Larkspur, California, we have also retired the traditional A–F grading system in favour of standards-based learning practices, a process that took several years.

Here are some strategies and mindsets that helped guide our journey.

We started with a single question back in fall 2017: How do our current grading practices at Hall Middle align with our district’s values and student learning outcomes?

The ensuing conversation was surprisingly brief. We came to a quick consensus that our points-based A–F system did not square with what we clearly defined as successful learning for all students. We wanted our students to be more interested in how they could improve their understanding of concepts rather than how they could raise their grades.

That first question led to a second one: If our grading practices aren’t in alignment with our values, why do we continue to use A–F?

As a school and district, we were investing enormous time and energy in developing relevant curricula and culturally responsive pedagogies, only to resort to 19th-century grading practices that were essentially transactional in nature. Instead of prompting additional curiosity for continued learning, A–F grades were sending our students the wrong message—“earning, not learning.”

Learning is complex, and our feedback practices should be, too. Once we had this collective awareness and sense of possibility, we began a slow and patient journey to create a new language of learning—a process that continues to this day.

GET COMFORTABLE WITH DISCOMFORT, AND SLOWLY BUILD CONSENSUS

Change is emotional work, and it can be uncomfortable. Leaders looking to support grand conversations about building the future of their institution need to anticipate that these thought exercises will make some members of the faculty and community uncomfortable. It’s important to remember that discomfort can be a positive sign that there is a substantive conversation taking place.

Leaders set the tone of an organization—and its pace. We borrowed an idea from Michael Fullan, an authority on educational reform and author of Leading in a Culture of Change—the concept of “slow knowing.” This is as much a process as it is a mindset that leaders can demonstrate to help the people in an organization experience a meaningful stake and role in the work at hand. It communicates that their ideas matter and that the organization will have the patience and discipline to nurture that idea to fruition over time, not in a frantic rush to implement.

There are lots of good ideas in education that die slow (or quick) deaths—not because of their lack of merit, but because of the way they are introduced. We can have all the research and conviction behind us in dismantling points-based grading practices; however, as is the case with any holistic shift in practice, our conviction alone isn’t what encourages support from all parties affected by the change.

For all the positive examples of schools experiencing successful transitions to SBL, there are still horror stories about quickly patched-together implementation plans, usually done without any meaningful input from teachers and stakeholders, that die spectacular deaths—often salting the earth for years to come, with respect to this kind of change.

At our school, every important decision involved multiple rounds of conversation, feedback, and surveys from teachers. This included the following:

INVITE AND REFLECT ON INPUT PUBLICLY

Our year zero of implementing standards-based learning practices was 2019–20. We understood that we were like newborns in that every day presented new information and situations that were unfamiliar, and we made a key decision after the first report card to craft a parent survey to understand their experience and solicit their ideas and input.

We not only asked for feedback but also published the results and presented them, along with staff feedback, at a board meeting in January 2020.

Inviting input means that people have the opportunity to express not only criticism but also support; often those are the voices that go unheard. It can be tempting to avoid avenues for community input; in doing so, leaders may succeed temporarily in not hearing the critical voices, but they also will fail to surface the many people who are quietly enthusiastic about change.

KEEP STUDENTS’ WELL-BEING AT THE CENTER

In traditional grading systems, more students than not are motivated by fear—fear of losing points, fear of getting less than an A, fear of their parents’ and teachers’ disappointment or anger. But fear does not make a kid learn more—it just makes him or her stress more. There is nothing wrong with striving to succeed in an academic setting, but it’s important to recognize that high academic achievement comes high stress and high pressure to perform. The result, all too often, is a hit to students’ mental and emotional well-being.

The mental health and wellness of students should be of paramount importance to educators; in fact, there is nothing more important for us than to reduce the stress and anxiety that our students feel. Decades of research tells us that standards-based learning practices help accomplish this.

The big change is hard and takes time; the State of California first recommended standards-based learning in 2001, almost a full generation ago. But with more examples like that offered by our school, and a commitment to a deliberate, inclusive process, we know that others can successfully follow suit.

We’d like to thank Dr. Toni Brown and Dr. Julie Alexander—principal and sixth-grade teacher at Hall Middle, respectively—for their contributions to this article and to the process of implementing SBL.

Tweet
More in this category: « Using Student-Generated Questions to Promote Deeper Thinking The Value of a Camera-Optional Policy »
back to top