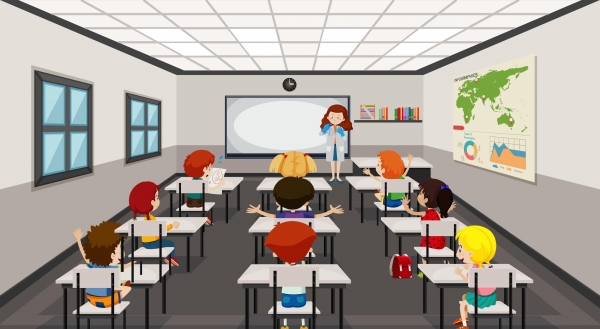 Let's start with a question I've been asked on more than one occasion.

"I know my content and like my students, but sometimes it's hard to get them under control so I can teach my lesson. What tips for classroom management can you give me?"

My general answer is that you can never have too many positive, not punitive, classroom management strategies in your toolbox.

Obviously, there are serious student transgressions, including violence, where some kind of punishment is an appropriate response.

However, in many other instances, punishment may work only temporarily, may not work at all, or may only make the problem worse. Research suggests that punishment often primarily teaches the student that he or she just has to be more careful next time to avoid getting caught.

Community organizers try to help people understand the difference between public and private relationships (I was an organizer for 19 years prior to becoming a teacher). Often, those in power will try to blur that division when it suits their purposes (for example, politicians kissing babies).

Here is another example: I have spent time over the years working with many organizations, including religious congregations, organizing for community improvements. The political decision-makers with whom we would have to negotiate for those neighbourhood changes were sometimes members of those congregations, and they would often try to privately influence pastors or congregation leaders to take a different public position. The religious leaders, in turn, would point out that when it came time to participate in public life, it was a public relationship and public dialogue -- and when it came time to a personal issue, it was a private relationship and a private dialogue. In public life, the relationship was conditional, based on negotiation and reciprocity. In private life, the relationship was often based on love and friendship. This distinction was particularly important to demonstrate in public settings.

And we carried this distinction over to how members needed to act in the context of the organization -- at our meetings, with the media, and whenever they were in the public eye.

I apply this concept in the classroom by helping students understand the difference between public behaviour and private behaviour. When students are in the classroom, it is a public space with certain expectations. One small example is a student shouting out "I'm bored" or some other inappropriate comment.

One possible response to that kind of remark is a sharp admonishment from the teacher. Instead, though, what I generally do, either right then or at the next available opportunity, is to go over the student, put my arm around his or her shoulders, and have this kind of quick dialogue, with a smile:

Me: "Johnny, is it okay for you to think what you said?"

Me: "Johnny, is it okay for you to tell your friends after class what you just said?"

Me: "Johnny, is it okay for you to say what you just said out loud in the classroom?"

And with both of us smiling, it's over.

I sometimes will have done it enough times with a student that when I go over, he or she will recite all of the lines. Notice that the dialogue leads with what students can do, instead of what they can't.

These kinds of inappropriate comments seem to decrease as the school year goes on because at least some students gain a greater understanding of the differences between public and private, an understanding that should serve them well for years to come.

"What Would Be the Long-Term Effect of Doing That?"

Educator and positive classroom management consultant Marvin Marshall recommends a simple strategy of asking a disruptive student a simple question, either in the moment or afterwards: "What would be the long-term effect of doing that?" As he suggests, asking can be far more effective than telling.

I suspect many teachers have had an experience like this:

A paper aeroplane, ball of paper, or pencil flies through the air, or somebody makes an obnoxious noise. The object is probably aimed at another student, and it may or may not hit the intended target. The noise is just meant to be funny.

You can tell the general area it came from, but you don't really know who the culprit is. It's frustrating because that kind of behaviour does not contribute to a learning community.

What do you do?

It's not uncommon for teachers to first yell something like, "Who threw it?" No one admits to it, and then the teacher will punish the entire group.

Here's a definition of collective punishment:

I'm not convinced that this behaviour is one we want to model for our students.

If collective punishment is out, then what are the alternatives?

This kind of misbehaviour does not happen that often in my classes, thankfully, but it certainly does occur. What I usually do is go over to the area where I suspect the noise or projectile originated and quietly explain that I don't feel respected when this kind of thing happens. And, since I feel like I show that I respect students at all times, I would hope they would want me to feel respected. I then explain that I don't know who actually did it, but that I would like each of them to commit that they will not throw something (or make a noise, etc.), and we shake on it. I tell them that I'm sure they are people of their word, and the matter is closed.

Nine times out of ten, that is the end of things, and there is no repetition.

However, if it does happen again, I go to the next step. For example, somebody in my class was occasionally making an obnoxious noise. I knew it was one of two students. I did the first step with them, and that went fine. Then, two days later, one of them made the noise again.

I asked them both to come outside with me, and I explained that I was disappointed that one of them was not keeping their word. I knew that one was trustworthy, but I didn't know which one. So I said that I couldn't trust the word of either of them and didn't like feeling that way. I suggested that the person who was making the noise might want to think about how his or her actions were now affecting the other student. Then, I gave them a few minutes to talk about it privately (I left the door open and asked them to stay in front of it so I could observe their actions, but not overhear what they said).

So in other words, the second step, when necessary, is to ask students to consider the impact their actions have on others and ask them to try to work out problems among themselves. In my teaching career, this has almost always resulted in stopping the inappropriate behaviour and, I hope, students, gaining some added maturity.

Of course, one of the most common situations, where the spectre of collective punishment is raised, is after a difficult time with a substitute teacher. One preventative strategy is the use of something like the Attitude and Behavior With A Substitute Teacher grading rubric. Early in the year, the teacher shows the simple rubric to students and explains that a substitute will use it with them. Five minutes prior to the end of class with the sub, he or she will distribute the rubrics, and students will write down their names and grade themselves. The sub will then go around, give what grade he or she believes the student has earned, and collect the sheets (this process means the sub does not have to worry about remembering individual names and can base the evaluation on student's faces).

This can be a very effective strategy to reduce teacher temptation to inflict collective punishment on a class, enhance the likelihood of a class with a sub being somewhat productive, and dramatically reduce stress for the sub.

After a class has shown that it understands and respects the expected behaviour, a teacher can experiment with not using the grading rubric and explaining to students that he or she trusts that they will act appropriately.

In Part Two of this excerpt, I'll offer additional positive classroom management strategies. In the meantime, please share your own in the comments section below.

Tweet
More in this category: « Coaching the Novice Teacher In Defense of School Counseling »
back to top