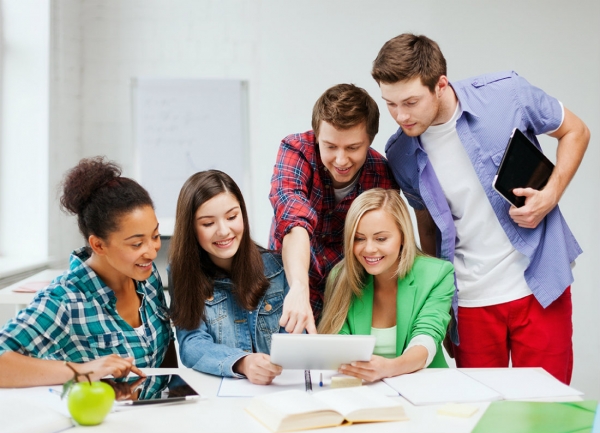 When high school students identify problems in their communities, teachers can empower them to work for change,

Late in the 2017–18 school year, I gathered my class at Thurgood Marshall Academy in Washington, DC, to give a pep talk before the AP Government exam, and I found my voice catching, full of emotion because there was an empty desk in the room. One of my students had been killed in September in an attempted robbery as he was walking home, sending our school into a place of grieving. Four months later, another student at our school was shot and killed, putting us back in that place of grieving.

My students worked hard to adjust after losing their friends, and they found power in their voices by creating Pathways 2 Power, a student-led advocacy group that seeks to spark city-wide conversations around issues like violence, housing insecurity, and mental health. Their work gave me a renewed strength to keep teaching.

Action civics—encouraging young people to find their voice as a way to drive their engagement in issues that are important to them—has always been at the heart of my government classes. But that year it quickly became clear that one unit on taking action wasn’t enough—students were eager to build the civic skills and dispositions needed to take steps to drive systemic changes and help us move through the grief our school was experiencing.

I used Mikva Challenge’s Issue to Action curriculum—which is grounded in teaching critical thinking, communication skills, research, and problem-solving—to support my students as they worked to “learn democracy by doing democracy,” as Mikva Challenge puts it, outside my classroom walls. Pathways 2 Power grew out of this work—students took what they had learned and started their own after-school club.

The pace of our curriculum can be so hurried that teachers may forget the power in slowing down to ask students what is important to them. When we create spaces to bring in the experiences that make students experts in their own communities, we recognize and value their authentic selves as a meaningful context to drive their own learning.

I used lessons from Mikva’s curriculum around community asset mapping and leadership values. Students delivered speeches on personal, critical issues. Using the skills the students developed by working on their speeches, the Pathways 2 Power group created a public service announcement called Recognize Greatness to show their peers that young people have the power to create change in their communities. It is entirely student-written, designed, and performed to capture a collective call to action.

To better understand the problems around violence and safety that students had identified in their community, they had to study the root causes of violence, such as lack of access to mental health supports and inequalities in education.

We also looked at who was impacted by the violence and the accompanying feeling of being unsafe. Students conducted research by holding interviews, focus groups, and round tables to invite our larger community into the conversation. In that process, city decision makers helped students think about actions to take to address the overarching problem.

It should be standard practice for teachers to listen and respond to the student's voice, but often we are afraid to step out of the leader position in the classroom and let students take charge. To push myself to let students lead, I had students use a design thinking strategy to generate ideas. Students started with one idea, built on it by saying “yes, and...,” and then followed up with a new idea. The idea is that there are no bad ideas, only ideas to build on.

So many ideas were generated in this process that students had a list of actions that they could work with. My job was to facilitate and support the execution of their ideas, not add my own. I assumed the role of note-taker during the ideation stage, remaining silent and tracking their ideas. I found that students were far more creative and action-centred than I would have been on my own.

It can be hard to manage a class of 25 or more students trying to decide what action to take. Each time I work through this cycle, students naturally gravitate to a root cause they feel connected to and want to address. When setting goals, students identify whether they would like to change people or change institutions so they can pair their actions with a clearly defined goal.

Students think through the steps they need to take by working backwards and identifying allies to help support their goals. Then they get to work: After their two peers were killed, for example, they engaged the media and advocated for change as part of their effort to increase the safety of their community.

It is important for students to be able to celebrate their victories, tell their stories, and recognize that change is ongoing and part of a much bigger process. When reflecting, students can pass the vision on to a new group and invite them to continue the work to achieve the bigger goal.

Using the action civics model, I’ve seen my students take on school-based issues such as changing recycling strategies and creating a support group for peers who have parents who are incarcerated. I’ve also watched our Pathways 2 Power leaders create a mural that honors the friends they lost to gun violence. With each success, we take time to showcase our work and celebrate each other as change-makers.

We educators can allow students to be the leaders that they are right now so that our young people develop agency and continued the commitment to creating the changes they want to see in our society.

Tweet
More in this category: « Giving Teachers The Freedom To Fail Preparing Social Studies Students to Think Critically in the Modern World »
back to top