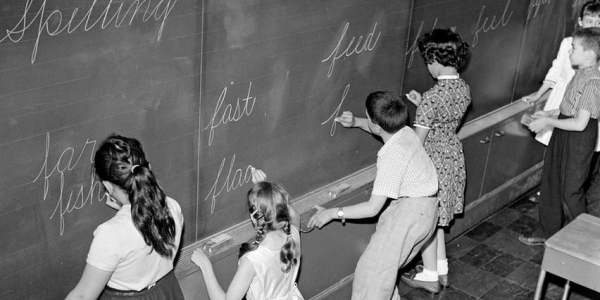 Pedants, rejoice – National Grammar Day is here! But let’s think carefully about what exactly it is we’re celebrating

You didn’t know? Me neither, until recently. It’s more American than British, and was started in 2008 by Martha Brockenbrough of the Society for the Promotion of Good Grammar.

So what are we supposed to celebrate? Before you run outside disguised as a proper noun, or convert your blog style to baroque Dickensian, let’s consider what is at stake.

In the blue corner: those who espouse National Grammar Day and think grammar is going to the dogs. In the red corner: professional linguists, who hold the diametrically opposed view of what “grammar” means.

There is much hostile misunderstanding between them, mostly due to radically different interpretations of the word. Linguists define it roughly as “the whole system and structure of a language or of languages in general, usually taken as consisting of syntax and morphology”.

Everyone else understands it as “a set of prescriptive notions about how to use English”. Interpreted thus, it becomes a rubbish chute down which people shove every use of language they object to (or should that be “to which they object”?).

In its technical sense, grammar mainly comprises the rules about combining words to make sentences, inflections (eg “dived/dove”, “consortia/consortiums”), what adverbials are, and the like.

Writers of real grammars do not class mere spelling mistakes as grammatical errors. In fact, the linguistic and technical definition of grammar excludes everything that raises some people’s blood pressure.

Things seven need about know to you grammar

2. Objecting to “verbing” nouns (eg “to interface”) is not grammar. Charitably speaking, it is a stylistic preference; uncharitably, it is paranoid prejudice.

3. Mispelling [sic] a word is not grammer [sic]. It is poor spelling. But who never makes a spelling mistake?

4. If a Yorkshire person says “it were her”, or someone from anywhere says “I done”, it is not bad grammar. It is non-standard, which is not the same.

5. New words/expressions are neither good nor bad. Like them or loathe them, they have nowt to do with grammar.

6. When someone interprets “nonplussed” to mean “not fussed or bothered”, that too has nothing to do with grammar: it is a word in the process of changing meaning.

7. If you dislike the way someone pronounces something, you dislike it. That’s all. Again, grammar doesn’t come into it.

This tut-tutting interpretation of “grammar” developed over centuries for many reasons, particularly to mark status. An 1892 quotation about aitch-dropping shows how rigorous such demarcations could/can be: “A very fine young man, but evidently a nobody, inasmuch as he dropped his aitches and so on.” (Rolf Boldrewood, Nevermore, 1892.)

Yet, as Terry Eagleton says: “Dropping your aitches in Knightsbridge probably counts as a deviation, whereas it is normative in parts of Lancashire.” (How to Read a Poem, 2007.)

Prescriptivist sneering emerges in the book title I Judge You When You Use Poor Grammar, derived from a Facebook group. Most mistakes its members glote [sic] over are spelling glitches or word choices. The Society for the Promotion of Good Grammar website invites us to sneer at “distinguished the fire” for “extinguished”. Sadly, this pseudo-grammatical anality is as irrational as certain people’s (ie English southerners’) prejudice against northern accents.

One example illustrates the arbitrariness of pre/proscriptions. Some American editors get hysterics if a food, diet, etc is described as “healthy”, insisting that only “healthful” is correct.

The (false) reasoning behind this is that if you define “healthy” as “in good health”, it applies, by definition, only to people. A turnip cannot – as far as we know, but then we don’t speak “turnip” – enjoy rude good health, and therefore another word is required.

“Healthful” is the older word, granted, but “healthy” has meant “conducive to good health” since the 16th century. Its pariah status was proclaimed in 1881, and has since become a minor editorial meme. Banning it ignores a productive feature of English: the transferred epithet. You can apply “sad” both to people and to what makes them sad. Countless other words behave similarly: to except “healthy” is nonsensical.

Any fool can make a rule

And every fool will mind it.”

Amen! By interpreting “grammar” as our entire language system, we celebrate the ingenuity of human and animal brains in developing it, and the myriad ways in which it enriches us. Let’s also celebrate that everyone knows the grammar of their language, even if they can’t formulate its genuine rules.

Tweet
More in this category: « Linguistics and Foreign Language Teacher Training Different Methods of Teaching Grammar »
back to top