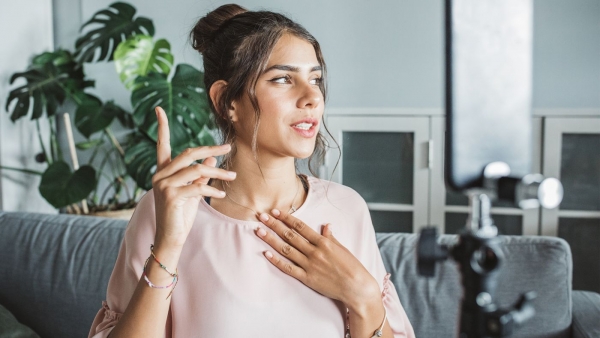 When a teacher brought in actors to perform in her virtual Macbeth and Romeo and Juliet units, students were thrilled. Local actors—or your school’s theater program—could do the same for you.

I remember shooting the breeze with my seventh-period freshmen on that fateful Friday afternoon—March 16.

The pandemic was looming, and we were all wondering if the school would be shut down after our spring break the following week. “I will tell you one thing,” I said. “There is no way I am teaching Shakespeare online.” I figured I would cover something else for two weeks, and then we would be back. Right?

Little did I know that I would never see those students in my classroom again. When it sunk in that we might not be returning to school at all—just a few weeks after my declaration that I would never teach Shakespeare online—I changed my tune: “There is no way I am not teaching Shakespeare!”

I wound up addressing and sending 80 manila envelopes to my students, each one containing a spiral-bound script and the potential for a transformative encounter with Shakespeare’s genius. From there, we embarked on a surprisingly successful journey of studying Macbeth (with my sophomores) and Romeo and Juliet (with my freshmen) online. Here’s how I made it work.

When you’re asking students to engage with Shakespeare, getting their buy-in is half the battle. Fortunately, this step was easily replicated online. Their first assignment was to watch the short film Why Shakespeare?, produced by the National Endowment for the Arts. I asked students to write down reasons for studying Shakespeare as they watched, and I had them post their own “reasons to read Shakespeare” to the virtual bulletin board Padlet.

Next, they read two articles to see the points that (a) Shakespeare’s language is modern and not as out of reach as they might think, and (b) you don’t have to get every little thing to understand and enjoy Shakespeare. I created a Google Forms activity to ensure that they read and understood the articles and then asked them to reflect on what they had learned.

Because I’m teaching 14- and 15-year-olds, I’m not too worried about their understanding the intricacies—or even the terminology—of meter and iambic pentameter. However, I do think it’s important that they gain a basic understanding of Shakespeare’s most famous rhythm because it helps them get into the groove as they read aloud and start to work with the text. Also, it’s fun!

But how do you effectively teach iambic pentameter over the internet? I used Padlet to create a virtual lesson that included video clips, activities, and a screencast to help them get a basic understanding. After that, they took a short Google quiz to demonstrate their learning. This year, now that I have a slightly better grasp of virtual instruction, I’ll do some of that content synchronously and use an asynchronous lesson for the rest.

Just as I would during a normal year, I assigned students roles for certain scenes and gave them some basic directions for preparing. I warned them that our virtual meetings would be awkward but worth it, and I encouraged them to turn on their cameras but didn’t push or punish those who were not up to it.

Once or twice each week, we got together on a Google Meet and worked through a scene or two. I recorded these sessions and required students who couldn’t make it to watch and create a written response. Not all students made it to our meetings, but the ones who did seemed to really enjoy the interaction with their peers.

In the beginning stages of the pandemic, many companies and actors rallied to offer quality Shakespeare online (and a lot of this fabulous content is still available). Because of this, I was able to offer an awesome series of experiences for students as they worked through each play.

We would read a scene together; then I would ask them to watch a film version (or compare several), have them listen to a section using the University of Utah’s Self-Isolation Shakespeare Project, and wrap it all up with a clip from one of the best Shakespeare companies in the world. In this way—scene, workshop, movie clip, class reading—we worked through each act.

One unexpected benefit of the early days of the pandemic was that many of us connected with people we hadn’t seen for some time. For me, it was my old acting conservatory classmates. Getting back in touch with them was the inspiration for the live performances I put together and asked students to virtually attend. My actor friends—quarantined and out of work in New York City—gladly signed up.

I enthusiastically advertised these live performances to my students, but I honestly didn’t know whether my students would buy into the hype I was trying to create; whether enough students would show up to make it worthwhile for the actors; whether the whole thing would be derailed by technical difficulties; or whether it would be too awkward, too boring, or both (for my students, not me, of course).

It turns out that experiencing live theater at the moment is thrilling even over the internet. My students were totally impressed, and most of them said this was their favorite part of the unit. Any teacher could replicate a similar performance by contacting their local Shakespeare or theater company or even just asking students from their school’s theater program to help out. I will absolutely continue to do this in my classroom whether I’m teaching virtually or not.

Each spring, I begin our study of Shakespeare with one of my favorite quotes from Hamlet: “There is nothing either good or bad, but thinking makes it so.” Not only do students easily interpret the quote (See? You do understand Shakespeare!), but also it’s a perfect teaser for the idea that engaging with Shakespeare can be wonderful and meaningful if we are open to it, and if we want it to be. The same could be said of virtual learning, which, though it has many downsides, also comes with some unexpected benefits and hidden potential.

My goal as a teacher of Shakespeare in a public school is for students to engage, have fun, surprise themselves with their ability to work with the language, and—ideally—think that learning about Shakespeare is worth it. When we went fully remote on short notice, I worried that my students wouldn’t understand and enjoy Shakespeare without me right there with them.

Turns out Shakespeare didn’t need my help. The brilliance of his work shines through, even in an online format, and I believe that I was able to achieve the same goals. This spring, I will again be teaching Shakespeare online, and I plan to use many of the same lessons and strategies I did at the beginning of this process. But even when we are back to normal, I will be inspired by what I have learned, and I can’t wait to have a gathering of professional actors on the big screen in my classroom someday.

Tweet
More in this category: « How to Guide Students to a Deep Understanding of Math Concepts 5 Tips for Teaching Virtual Preschool Classes »
back to top

How Project-Based Learning Can Teach Emp…

6 Tips for Introducing Chapter Books to …

New Teachers: How to Start Your First Ye…

Reprioritizing Standards for Middle and …