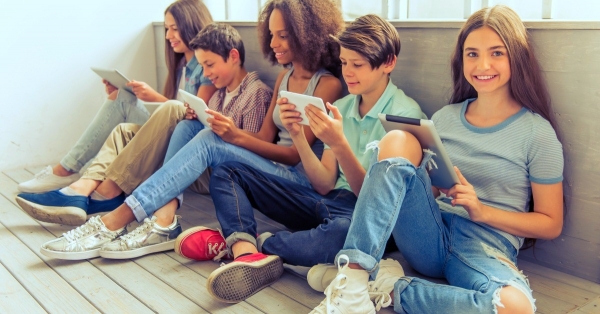 When students read comics or create their own, they have an opportunity to develop their creativity, critical thinking, and communication and collaboration skills.

Students today are digital natives who need to develop the 4 Cs—critical thinking, communication, collaboration, and creativity. Comics are perfectly situated for use in developing these competencies, and they work across grade levels—a single story may have the capacity to speak to both elementary and secondary school students.

Raina Telgemeier’s Guts, for example, might be classified for the around fifth grade based on reading level, but this story of a girl struggling with anxiety that manifests itself in stomach ailments can reach any high school student, regardless of gender, who is trying to cope with bullying, test-taking, family issues, and more.

Similarly, George Takei’s They Called Us Enemy, a memoir of his childhood experience living in an internment camp for Japanese Americans during World War II, is appropriate for both fifth-grade English language arts and 11th-grade U.S. History.

Teachers working to help students consider the way words and images combine to produce a single panel’s composition may want to check out Scott McCloud’s Understanding Comics. And Nick Sousanis’s Spin Weave and Cut offers practical annotation projects for thinking about comics in the classroom.

Comics’ dual languages—verbal and visual—give them the range and depth to foster the 4 Cs across the curriculum, both when students analyze comics and when they create them as products to demonstrate their learning.

Critical thinking incorporates an array of higher-order thinking skills, such as analysis, evaluation, interpretation, problem-solving, and systems thinking. Even a simple three-panel comic can elicit many of these skills as students read. They must pay attention to literary details such as narration, setting, characterization, and symbolism, and visual elements including line, shape, colour, and contrast.

Students can also develop interpretive skills by thinking about comics’ specific language of word and thought balloons, sound effects, lettering, how the gutter—the space between panels—is used, and panel layouts and sequencing.

An extraordinary quality of comics that is ripe for student interpretation is their ability to collapse time and space in a single panel, i.e., to turn space into time and time into space. For example, students could take a single panel from Richard McGuire’s comic Here and interpret it in terms of how space and time are represented through elements inherent to comics.

McGuire uses a panel to double as a window that, in turn, simulates a computer screen, conveying multiple timelines in a single space. The entire comic takes place in one corner of a room in a house. Panels within panels, combined with sparse text, stretch the building’s history back to the prehistoric period and project it forward into the future. Who occupied this house at different points in time, and what do the occupants’ activities say about family life and history at a different moment? Who might occupy the house in 20 years, and what will they be doing? What will society look like at that future time? These questions cascade from a single panel and the history of the building becomes a palimpsest for history itself. There’s a lot for a student to unpack.

In comics, the verbal interpretation must always also be a visual interpretation, and that interpretation, as Kerry Freedman argues in a collection of essays on comics in the classroom that I edited, is complex: We visualize the totality of an image, a more synchronous perspective than the temporal dynamic of reading words one after another. Consequently, comics allow for a different form of multimedia communication appropriate to today’s visual culture.

Students’ everyday writing typically consists of texts, tweets, Instagram posts, and other truncated forms of communication, and teachers can use comics to demonstrate how brevity conveys key information in such shortened formats. In a comic, dialogue and narration distil a message to its essence.

Have students take a page from their favourite short story and adapt the 250 or so words into 10 words for a three-panel sequence. You can also do this with any piece of prose from a textbook, a lab exercise, or directions on how to do something. Students don’t have to draw the three panels—they can use comics creation tools like Pixton or Storyboard That to generate panels, word balloons, caption boxes, background art, and generic premade characters.

This exercise will foster students’ ability to communicate clearly and concisely with concrete detail.

Comics are inherently collaborative. Ordinarily, a comic book requires a writer, an illustrator, a colourist, and a letterer, in addition to a managing editor. In the same way, students from primary school to high school can work together on creating a comic. Divide students into teams and assign a topic that speaks to them or the world they inhabit—e.g., attending school at home during a pandemic. I prefer the term teams instead of groups because the team implies a coordinated unit working toward a common goal. Plus all students are familiar with superhero teams—the Avengers, Teen Titans, etc.

The process of making a comic together necessarily involves collaborative, creative problem-solving. How will students represent a virus, if they’re making a comic about the pandemic? And will they reimagine what a superhero is? The staff in an emergency room converging on a new patient could be a super-powered team.

In creating original work, a student must think critically about how to address their issue or topic, communicate about the words and pictures they’ll use, collaborate on the roles each team member will play and be creative in actually making the product of their learning. Comics and the 4 Cs go together like Stan Lee and Jack Kirby, paper and pencil, or tablet and touch.

Tweet
More in this category: « Co-Teaching in Distance Learning Lessons Learned During the Pandemic »
back to top

How to Prepare Students for the Workplac…

Teachers Around the World Tell Us Reopen…

A Guide to Equity and Antiracism for Edu…