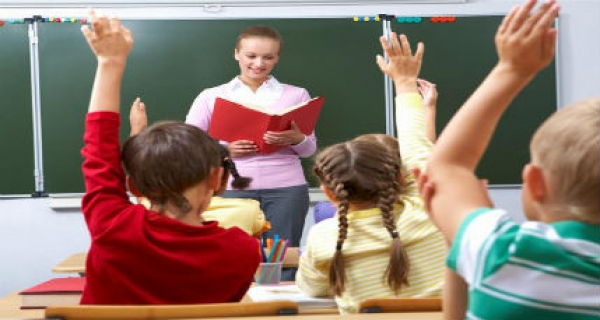 "What if" thinking can open the door to a world of opportunities. Just ask Rich Lehrer. A science teacher for 24 years, he's always looking for ways to make learning more meaningful for his students.

But it wasn't until the last few years that he started asking questions that have led to more authentic experiences: What if we invite students to solve real problems? What if the classroom doesn't have walls? What if learning activities don't always end with letter grades?

Those questions were percolating when Lehrer chanced upon a colleague's Facebook post about the Robohand. It's a mechanical prosthetic hand made with a 3D printer using open-source software. Lehrer immediately thought of his three-year-old son, Max, born with a condition that inhibited the growth of fingers on the child's right hand. "My first thought was, oh man, I'd like to build that for Max. About 10 seconds later," Lehrer recalls, "I had another thought: What if my kids could help me build that for Max?"

An Invitation to Innovate

Lehrer teaches at Brookwood School in Massachusetts. The K-8 school has an active club program and a willingness to entertain faculty initiatives in areas such as project-based learning, global education, and innovative uses of technology. Lehrer decided to leverage informal learning time as an opportunity for interested students to tackle the challenge of building Max a Robohand.

When Lehrer pitched the idea to students, he made it clear that they would be heading into uncharted territory. The teacher had done some preliminary research and connected with Richard Van As, a South African who is one of the developers of the Robohand. Van As generously offered to fabricate a prosthetic hand for the child himself, but Lehrer decided to "keep that offer in my back pocket. I think he was surprised when I explained that I wanted to build this with my students." Lehrer was a little worried when Van As told him it would require "being crafty." That's not a description anyone has ever called the science teacher.

Ten students signed on for the Robohand Club and got to work. Although students weren't the inventors of the Robohand, they had to think like innovators to solve a range of problems. For starters, they had to put their networking skills to work. They identified three big needs: find a 3D printer, find a source of thermoplastic material to make a mould of Max's hand, and find the metal hardware components that would turn printed "fingers," bungees, and other components into a functioning, mechanical hand. "There was a time when we had none of those things, and no idea where to get them," the teacher admits. "We were constantly brainstorming, who can help us?"

Plenty of people, it turns out, we're interested in helping. The head of maintenance at their school proved to be an invaluable asset in helping them understand how to make the hardware work. A renowned hand surgeon from Boston Children's Hospital, Dr. Peter Waters, introduced them to a supplier of pediatric orthotic products. Boston Brace donated hundreds of dollars' worth of thermoplastic material for the project.

The search for a 3D printer brought them into contact with Arjun Bhatnagar, a high school senior at The Governor's Academy who became an important contributor to the project. Lehrer had called the high school science department to ask about getting access to their 3D printer. "The science teacher explained that the printer was located in the art department, and the person who knows the most about running it is a student. Even the 3D printing turned out to be hugely educational," Lehrer says.

After Skyping with the Brookwood students to talk through the technical requirements, Arjun printed off some sample pieces. "When I walked in one day and saw these little fingers all arranged," Lehrer says, "I just about lost it. This project was becoming so personal."

Months after they embarked on their journey, students finally had all the components for a prototype ready to assemble. Lehrer spent his spring break rewriting the Robohand assembly manual into language better suited for eighth-graders. They scheduled an extended work session for a Friday afternoon in April, including Arjun and Max. "It turned into a big sanding session because we realized the pieces didn't quite fit. But that day got us realizing, this was going to work," Lehrer says. It took another work session, plus more troubleshooting before they had a device ready for Max to try out.

With the whole team watching, Max used the prosthesis to pick up a block. "On the video, you can hear my kids cheering and me laughing my head off," Lehrer says. "I know we'll all remember that moment for a long, long time."

In hindsight, Lehrer can see how the club structure offered a range of benefits for this unusual project. He didn't have to map the project to learning goals or think about grading. "I didn't need to do assessments for these kids. Not that rubrics aren't important," he adds, "but there are times when you want kids to just take an idea and soar. What these students have learned is so clear to them. Their level of reflection is like nothing I've ever seen."

For example, a student name Simon "enjoyed figuring out ways to get around the problems." Sometimes big problems don't need complicated solutions. Basic technology can do a lot. For Emma, a memorable part of the process "was when we had to figure out how to make the hand more comfortable and easy for Max to use. I felt like I was really helping someone, and it was one of the best feelings I've ever had." Christian offered this reflection: "One of the bigger things I will take away from this is that regardless of all the teachers saying, 'You can make a change,' and 'There are still plenty of opportunities to change the world,' that actually is true."

The club schedule -- meeting just once weekly for 30 minutes -- also turned out to be an advantage. "That gave kids time to digest things, and it gave ideas time to percolate. When we all came back together a week later," Lehrer says, "it felt fresh. This fractal of time has produced an incredible learning experience. It's been a place for the true magic of project-based learning."

Interest from the club project has spilt into Lehrer's regular classroom. "We've had the most incredible conversations about new technologies, genetic issues, fetal development. Students have all these questions even if they weren't part of the project," Lehrer says. He keeps the prototype hand -- still in the troubleshooting phase-out on the counter to spark curiosity and inspire more questions.

For the upcoming school year, Brookwood students will have access to their own 3D printers. One was purchased after a video of the Robohand project was shared at a parent auction. A parent donated a second printer to encourage maker projects in the elementary grades. Will next year's students continue working to make improvements to the prosthesis? That's up to them, Lehrer insists, but his goal is to encourage them to use 3D printers "for real things, not trinkets."

A project with such personal significance has caused Lehrer to reflect on his own evolution as a teacher. "This wasn't just an assignment. This is real life," he says. "I'm indifferent territory here, and it feels a little risky." If he had seen the video [about the Robohand] three years ago, he adds, "I might have thought to show it to my students. But there's no way I would have thought about involving them to build it. It wouldn't have been on my radar."

As for Max, the Robohand has given the bright-eyed preschooler "an inroad to talk about his hand and the big kids who made it for him. Will it be life-changing for him? We'll have to take our cues from him," Lehrer says. "But already, we can see that it's helping Max to see his hand, himself, and his potential differently."

When Lehrer has occasions to talk about empowering learners, he says, "I just hold up this hand. I explain that it was built by an adult with little technical training, a tech-savvy high school senior, and a bunch of eighth-graders. If anyone's thinking we can't do real things with kids, I'm telling you you're wrong."

Tweet
More in this category: « Innovative Practice: 5 Strategies for the Early Learning Classroom A Crash Course in Innovation »
back to top