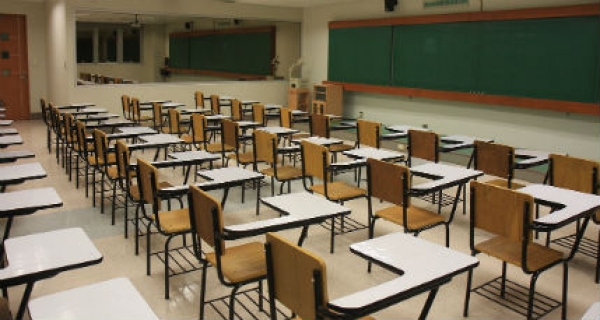 A Louisiana school succeeds by emphasizing social and emotional teamwork.

Editor's Note: Since this article was written, the students of Landry Middle School have moved into a new building, Raymond K. Smith Middle School, with Harold Blood as principal. Landry principal Dianne Powell is now running alternative programs for the St. Charles Parish Public Schools at the site of her old school. The Helping One Student to Succeed program is now defunct.

But a visitor rounding the corner would see a tame scene: fifteen or so eighth-graders in a circle, passing on a series of gentle taps to each other's hands, until the chant stops and the last student to be tapped -- with laughing and good-natured eye-rolling -- is "out."

At Equal J. Landry Middle School, in Hahnville, Louisiana, every day starts like this. Instead of homeroom, students have Tiger Talk, an introductory period during which they greet each other using eye contact and handshakes, play games that encourage interaction, and discuss topics that range from their favorite places for quiet time (Douglas gets a shy laugh when she reveals that her place is the bathroom) to where the Mississippi River -- which flows past some students' backyards -- really starts. By the time the students leave, they are warmed up both socially and intellectually.

Tiger Talk, named for the school's mascot, sets a tone reinforced throughout the day at Landry, a 363-student school that values social and academic teamwork. While other schools might look to raise test scores with drills and memorization, Landry is devoted to project learning and group work. Among the students (who are 71 percent African American, 27 per cent Caucasian, and 2 per cent Hispanic), discipline problems are rare.

Students work in mixed ability-level groups during class; often the ages of the students in the classroom are mixed, too, thanks to a program called Teenagers in Middle School (TIME), whose students are scattered throughout classes. Even between classes, when the halls are filled with the usual juvenile jostling, there's a marked lack of middle school angst.

"It's a school I love to come to," says Gayle Clement, technology coordinator for the St. Charles Parish Public Schools. "It's really committed to making the kids feel good." Eighth grader Jordan, who transferred from a school where racial prejudice was a problem she ran into, says she was "shocked when I came here" to see the students working together. Trying to put their fingers on how the school makes students so enthusiastic about learning, visitors from other schools have mused that the small size, rural setting (New Orleans is 30 minutes away but worlds removed), or old-fashioned church values students absorb at home might be responsible.

Dianne Powell, Landry's principal, says it's something more: Students model what they see in the teachers. "We have such a collaborative team effort between teachers," she adds. "We have professional development ongoing here every week. The teachers are willing to grow, which places enormous pressure on students to perform because teachers are continually learning."

Landry recognizes the importance of faculty collaboration. In the late 1980s, when Landry reorganized from its structure as a junior high school to a middle school format, the administration adopted a teaming approach, in which all teachers at each grade level meet daily to discuss upcoming lessons and to solicit advice and ideas from other educators in other subject areas. Using the 45 minutes of daily team-planning time, the teachers craft a sophisticated curriculum featuring monthly project-learning interdisciplinary units custom-tailored for the school's population.

Projects within these units expose students to real-life experiences -- sometimes unusual ones. One of the school's offerings is called Circus of the Kids. Within the space of roughly three weeks, students learn to mount a full circus, complete with aerial ballet and fire-eating.

Each year, students at Landry get to join the circus. A month-long project uses a circus theme to integrate subject areas and culminates in student performances for family and friends.

The experience unites disciplines -- physics concepts in tumbling, language arts in writing speeches for the master of ceremonies -- and it unites the students, too. Coming at the beginning of the year, the circus provides an opportunity to forge friendships. Eighth-grader Jont'e, who participated in the 2003 circus, says mastering fire juggling taught her another lesson: "I learned that you really have to trust people. I really had to learn that they're not going to do anything to hurt me."

A recent eighth-grade unit, Community on the Move, centred on cars and community. Cars, in this isolated area without public transportation, are huge motivators for the students. Science teacher Linda Watsky says this factor creates a real link between home and school life. "We have to be motivational," she adds.

The Community on the Move project played on that truth. In math, students chose a dream car. They drew "family status" cards, which assigned them various yearly incomes, dependents, and debt loads. Working with these constraints, they calculated the real cost of their car, including financing, down payment, and insurance, to determine whether they could afford it.

In science, students built model cars propelled by balloons in order to understand the physics of the vehicles. They looked at fuel efficiency and studied alternative fuels -- a hot topic in an area where much of the population works in local refineries. Social studies activities included students writing to local industries to ask them what vehicles were most used in Louisiana, and why. English lessons addressed the propaganda used in car ads and asked students to make their own advertisements.

In the course of their projects, students use computers to locate identified online resources such as fuel-efficiency charts or rosters of local industries. Landry students use other applications, such as Microsoft Producer, to create and present final projects.

Thanks to a large grant in 2000 from BellSouth (now AT&T South), the school now has Internet access and multiple computers in every classroom, as well as a project lab with computers and a library that can accommodate heavier computer use. The grant money was also used for professional development; teachers were paid to spend Saturdays learning how to successfully integrate technology into the curriculum.

The school district's Gayle Clement says the integration gives Landry students, fewer than 50 per cent of whom have computers at home, a better chance to succeed. "We feel really confident that when they enter the high schools, they've got a fair shot there," Clement says.

As another way of giving students a fair shot, Landry offers extra help throughout the day and after school. During the day, it invites mentors in. The Helping One Student to Succeed (HOSTS) program is a mentoring system in which volunteers -- mostly engineers from local companies such as Dow Chemical or Monsanto -- visit weekly to help students with algebra. After school, all students participate in academic tutoring; they can also work on their electronic portfolios every Wednesday.

Employees from local businesses mentor students and show how subjects like algebra are used in the real world.

Landry's Louisiana Educational Assessment Program (LEAP) scores have improved over the past five years: In 1999, the school's language arts passing rate was 83 per cent, while in 2003, the regular education students, after summer testing, achieved a 96.9 per cent rate of success. In math, the 1999 passing rate was 62 per cent, but four years later, again after summer testing, 94.8 per cent of regular students passed.

Parents are happy about the higher test scores, but they have more to say about Landry's projects. Parent Vanessa Jackson says the project model (working in groups to create a product or put on a performance) "broadens their self-esteem -- lets them know that as long as you try at anything, you can do your best."

If student enthusiasm is any indication, Landry teachers are getting their message across: "My teachers are great because they try to relate the teaching to what's going on in the real world," Jont'e says. "I wake up in the morning, and I'm like, 'Ooh, school today! Let's go!'"

Tweet
More in this category: « 10 Innovative Learning Stations That Get Students Reading Innovative Practice: 5 Strategies for the Early Learning Classroom »
back to top